Communities across the state observed Memorial Day on Monday, May 31, with remembrance ceremonies, the presentation of arms, the playing of taps. Dozens or hundreds of citizens gathered in local …

The Riverside Boy Scouts, Cub Scouts and Girl Scouts placed flowers in remembrance of all wars.

Communities across the state observed Memorial Day on Monday, May 31, with remembrance ceremonies, the presentation of arms, the playing of taps. Dozens or hundreds of citizens gathered in local cemeteries to honor and pay respect to men and women who have given the ultimate sacrifice to their country: their lives.

In Wellman the ceremony was presided over by the Charles A. Polton Post #427 of the American Legion. Joined by the Mid-Prairie High School marching band, the men and women of Post #427 honored fallen veterans in song, speech, and reverence.

Commander Charles Singleton told the story of Army Specialist Cindy Beaudoin, a nineteen-year-old woman who was killed in duty in the Middle East in 1991. Beaudoin wrote a letter to her parents, Singleton said, in the event that she wouldn’t come home.

“I did not come here to be a hero,” she wrote. “I came here because my country needed me to be here. As much as I hate being so far away from home, I am here with thousands of other soldiers helping to bring down a very deranged tyrant. If I could die while helping to achieve this, then I did not die in vain.”

“Cindy did not die in vain, neither did any other Americans we honor on Memorial Day,” Singleton said during his memorial address. “That’s why we’re here today… to honor the sacrifice made by the 1 million heroes who died while defending this country since the American Revolution. And that sacrifice is painfully shared by the gold star families and the close friends of these heroes. Most of us would not truly understand the depths of their despair unless we have experienced it, but we can always offer our support. We can wear the poppy. We can place flags and wreaths at their graves, we can donate to charities that provide for their families and we can look at their surviving brothers and sisters in arms and say, “Thank you for your service.”

In the post everlasting, Singleton took the time to remember four members of Post #427 who have passed since the last Memorial Day service in 2019 (there was no ceremony held in 2020): Ed Vachta, Marvin Yoder, Ed Bontrager and Ed Martin.

In Riverside, the ceremony was presided over by members of the VFW Post #6414. Cindy Michel sang “America the Beautiful” and “Star Spangled Banner” and the Riverside Boy Scouts, Cub Scouts and Girl Scouts placed bouquets in the cemetery to acknowledge all wars. Senior Master Sergeant Pamela Flynn, retired from the United States Air Force, gave the Memorial Day address.

She reflected that different generations of veterans have different reactions to being thanked for their service but all agree “with absolute insistence” that the gratitude belongs not to them, but to their fallen brothers and sisters who paid the ultimate price in service for their country.

“When we think of the tremendous sacrifices of survivors and veterans have made, physically and emotionally, how can we say thanks? What could possibly be good enough to say to our many true heroes that would convey how grateful we are that someone like them had the courage to do what many others could not or would not?” Flynn said. “As a nation, we made a promise, a promise that must be kept to our fallen and to their families. We thank our veterans by fighting for them when they can’t, by assuring they and their survivors get the care they have earned because they wrote a blank check up to and including their lives.”

Pet of the Week

Board approves 9 of 74 eligible Community and Food Program requests

Sometimes someone just can’t get enough of something. A person who cherishes cars would not be opposed to talking about motor vehicles for hours on end, a person who takes great joy in writing …

The first quarter was the only one played competitively in the score column. The Golden Hawks on an extremely hot streak, jumped to a 6-0 lead, four scored off the back of senior, Maya Nonnenmann. …

Despite the competitive nature of this affair, The Mid-Prairie Golden Hawks held a lead through three quarters, not giving up a tie until early into the third.  They only lost the lead once, … 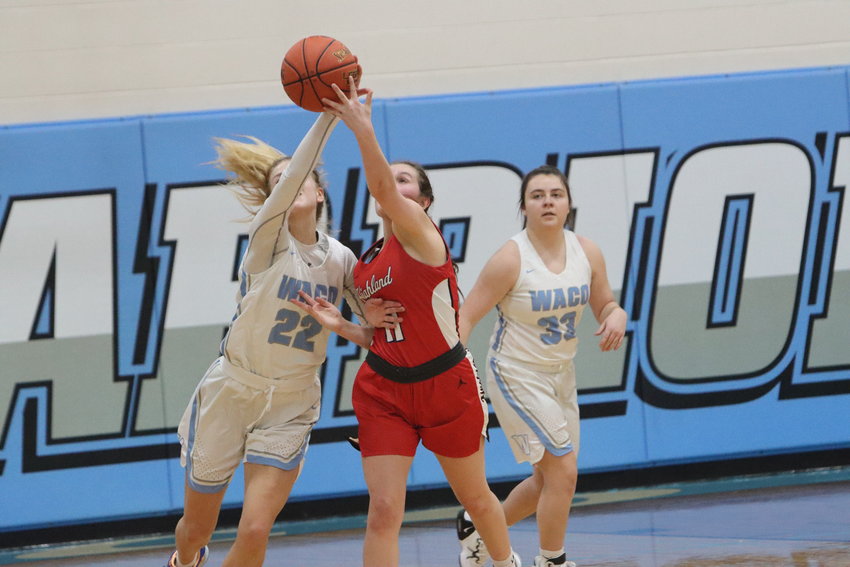 After lop-sided loss vs WACO, Highland finds its groove vs Wapello

Highand, hoping to bounce back from a sluggish offensive performance in a loss at home against Sigourney on January 23, went on the road to challenge the formidable second placed team in the …